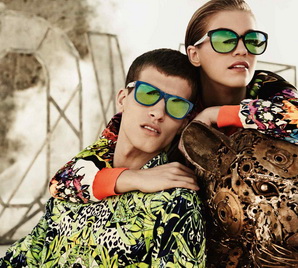 Roberto Cavalli was born in Italy in the year 1940. His family was modest and had powerful artistic talents and customs. Grandfather was an impressionist painter and her mother was a tailor. He was a judge at the Miss Universe 1977 pageant where his future wife (Eva Duringer) was a contestant, who represented Austria and won second place.

Cavalli had the procedure of printing on leather patented. During the next ten years of his life, he worked on patch quilt which is sewing the unmatched pieces of leather together. In the 1970’s he gained fame and recognition. In 2002, Cavalli opened the Just Cavalli café in Milan at Torre Branca and another boutique.

For the modern working woman who’s really wild at heart. Inspired by the blithe abandon of the Florentine design world, Just Cavalli brings wearers bold frames with even bolder designs; whether spicing up a business suit with a little bit of flash or putting the finishing touches on an outfit for a night on the town.